Here at Grin we've been dealing with ebike batteries for a very long time during which we've offered over 100 variants of NiCad, NiMH, LiFePO4, LiPo, and Lithium-Ion packs in all kinds of voltages, geometries, and capacities. It's been a love/hate relationship over those years, but the more recent mass production of 18650 lithium cells for high power consumer goods like power tools has shifted things to the love side, with ebike batteries that are cheaper, lighter, and with far longer life span than we could have ever wished for in the past. We're happy to stock both frame mount and rear rack mounted batteries from 98 watt-hours to 1100 watt-hours in size to suite the needs of most electric bicycle conversions.

Grin's 2020 battery offerings include a mix of flat rack and downtube style batteries made with Panasonic, LG, and Samsung cells to suite a wide variety of user needs. Each pack uses Anderson Powerpole connectors on the discharge lead and includes a robust BMS circuit for overcharge, over discharge, and overcurrent protection.

How to Choose a Pack

The very first consideration when choosing a battery pack is ensuring that it can handle the current draw of your motor controller. If you have a 40A motor controller, but your battery is only rated to deliver 25A max, then either the BMS circuit will shut off the battery at full throttle, or the battery will be stressed and have reduced cycle life.  The converse, having a battery that has a higher current rating than what your controller will draw, is no problem at all. In fact, it can be quite beneficial.

The next consideration is ensuring that the battery is large enough for your required travel range; it's no fun having a battery go flat before the end of your trip. In order to determine the range that you will get from a given battery, you need to know both the watt-hour capacity of the battery, and how much energy you use per kilometer. Sounds complicated? Not really. As a rule of thumb, most people riding an ebike at average speeds consume about 10 Wh/km from their battery, and this makes the math very easy. If you have a 400 watt-hour battery, you can expect a range of 40km. A 720 watt-hour battery? ~72km

Of course, if you go really fast or are pulling an extra load, then this mileage will be worse, like 12-15 wh/km. On the other hand, if you use the motor more sparingly, then you can easily stretch it down to 6-8 wh/km. The table below summarizes the expected range for these different example batteries under light, average, and heavy usage paradigms:

It makes very little difference whether you have a small geared motor, a large direct drive motor, or a mid-drive motor. The mileage and range figures for a given battery have to do with how you use the ebike, not which motor system is on the bike.

Tip: No one EVER regrets having too much battery capacity

The Case for Extra Capacity

The answer is that, unless you are seriously budget or weight constrained, this would probably be a bad battery investment. It might fit the bill initially for your commuting needs, but then it doesn't really leave any reserve if you need to run some errands on the way home or forget to charge it up one night etc. Even worse, as the battery ages over time, the capacity drops. After a year your 8Ah battery is now only 7Ah, it's only barely able to do your daily commute, and the next year when it is just 6Ah you now need to carry the charger with you and top it up at work every day.

Most people find that once they have an ebike, they use it for all kinds of applications and trips outside of just commuting, and the ability to go 50+ km on a charge opens up possibilities that wouldn't have been possible otherwise. Plus, as the battery ages and declines in capacity, it still has more than enough range for your key commuting needs. Imagine if instead of getting an 8Ah pack, you purchased a 15Ah battery. Even if after 4-5 years it has lost 30% of its original capacity, that's still over 10Ah and leaves plenty of reserve for your 24km commute.

Furthermore, if you have more capacity than required, then you also have the opportunity to do partial charging of the battery with a Satiator or similar device, so that instead of charging the pack to 100% to squeeze out every km, your standard charge is set to a lower 80 or 90% level. This can have a pronounced effect increasing both the cycle life and calendar life of a lithium battery by several fold.

And a final point is that a larger battery has a lower per cell stress during discharge since the current is shared among more parallel cells. Cells that are cycled at high discharge currents (>1-2C) exhibit noticeably lower cycle life than those cycled at low currents 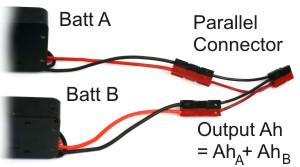 One of the easiest ways to increase the current handling capability and range is to put two or more batteries in parallel. In general, with lithium batteries of the same nominal voltage, this is no problem. It is ok to mix old and new lithium batteries in parallel, or even batteries from different manufacturers and with different capacities, so long as they are the same voltage. We stock a parallel battery joining cable to facilitate connecting packs this way.

Where things can get a bit dicey is in charging batteries that are parallel connected. If you leave the batteries in parallel while charging, then the charger current will get shared between the batteries and you can be sure that they are always at the same charge level. However, that does mean one of the batteries will be getting charged through the discharge port. For single port BMS circuits, this is not a concern, but on dual port BMS boards (separate charging and discharging mosfets) there is no overcharge protection on the pack being charged from the discharge leads. This can present a safety risk if there is a cell anomaly in that pack.

Alternately, you can separate the batteries and charge each with its own charger and then connect them in parallel just for discharging. Just make sure that both packs are indeed fully charged, as you don't want to connect them together when one pack is charged and the other is flat.

We sell roughly equal numbers of 36V and 48V battery packs, and all of our conversion kits and controllers work fine with both 36V and 48V (or 52V) battery options. Just because 48V is a larger number, it does not mean that a 48V ebike is intrinsically better / more powerful / faster than a 36V ebike despite what the ill-informed internet will lead you to believe. However, it is true that a given motor will spin faster at a higher voltage, and usually higher speeds will correspond to more power consumption. For most of the stock hub motor kits that we offer, a 36V battery will result in a commuting speed of 30-35 kph, while wth a 48V battery will result in closer to 40-45 kph.

If you are upgrading or replacing an existing battery pack, it is always safe to replace it with a battery that has the same nominal voltage. If you have a 36V ebike setup that is not from us, and are looking to 'upgrade' to a 48V/52V pack, more often than not you can do this without damaging the existing electronics. That is because most 36V motor controllers use 60V rated mosfets and 63V rated capacitors, and so even a fully charged 52V battery will not exceed these values. 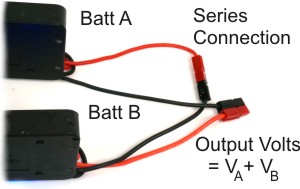 It is also possible in principle to series connect two 36V batteries to make a 72V setup, but the only battery we have that is intrinsically designed for this is our LiGo modules. With all other batteries, it is essential to use a pass diode across the output of each battery so that when one BMS circuit trips it does not get exposed to a large negative voltage. We have a special series battery cable with this diode built in available here.

When you series connect batteries, you want to make sure they are packs with identical capacities and specs. You also want to make sure that either your controller or Cycle Analyst low voltage cutoff is set such that the discharge stops as soon as one pack trips. Otherwise continuous current will continue to flow through the pass diode when you are running off just the one non-tripped battery, causing the diode to overheat and fail.

We like to use Anderson Powerpole connectors as the standard discharge plug on all of our ebike battery packs. These connectors are ingenious since they are genderless, allowing you to use the same plug both on both a load and a source, and the connector design allows them to withstand the arc of inrush current when plugged into capacitive loads much better than bullet style plugs. For the charging port, we like to use the female 3-pin XLR plug standard. This is directly compatible with the Satiator charger, and the quality Neutrik XLR plugs are rated for a full 15 amps per pin allowing very rapid charging. Unfortunately, this option is not available for many of the downtube battery enclosures. Originally we used the very common but low current DC 5.5 x 2.1 mm barrel plug, but have since updated to using the 3 pin connector from ST which is safer, supports higher currents (8A is no problem) and has a 3rd pin for battery temperature sensing. 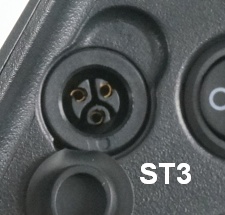 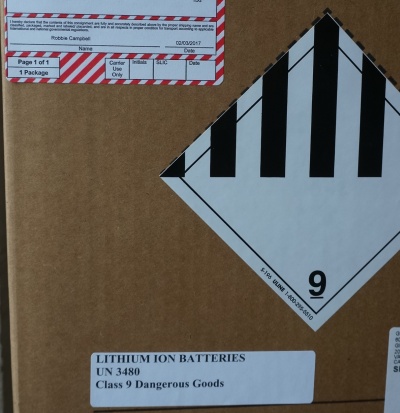 The shipping of lithium batteries is a complicated endeavor that frustrates the logistics of supplying and supporting ebike conversions kits. After numerous incidents of early lithium batteries either smoking or catching fire in transit, the transportation industry as whole recognized that lithium packs could not be handled casually like regular cargo and greatly stepped up the regulatory framework governing the shipping of lithium battery packs. These rules are constantly evolving, but generally ebike batteries are treated as Class 9 Dangerous Goods. In order to ship a lithium battery (whether by ground or by air) very strict packaging and labeling requirements must be followed, the battery must generally have UN38.3 test certification, and the person doing the packing and shipping has to be trained and certified in the handling and shipping of dangerous goods. When you order a battery from us, there is an automatic Dangerous Goods handling fee that is added to the order, and your battery pack is shipped separately from the rest of the kit as dangerous goods cargo. Many shipping companies do not offer dangerous goods services and we may change the courier selection to one that can deliver to your area.

If none of our own battery offerings meet your needs, we can also highly recommend the knowledgeable folks at Batteryspace.com and EM3EV as alternate suppliers of lithium battery packs in a wide range of capacities, form factors, and voltages.