Why don't you carry the Bafang BBSXX mid-drive kits?

We get this question several times a week and feel that it's worth devoting a page to the subject.

The Bafang mid-drives have become quite popular since they were first introduced as an aftermarket kit option around 2013. Prior to that, most of the mid-drive systms were designed for OEM bike frames and so not accessible to DIY conversions, or those that were meant for aftermarket installations were usually interesting but mechanically complex. The BBS01 design (which Bafang cloned from Sunstar) was neatly integrated as a self contained bottom bracket replacement without all the external mounting hardware, chains, pulleys etc normally associated with mid-motors.

In any case we've had samples of all the BBSxx motors and many variants from other manufacturers but have never felt that they hit the right note for what the majority of our customers are actually after. Integrated controllers limit your upgrade and repair options, wide 'Q' factor cranks to clear the motor can make for awkward pedaling, there have been limited chainring options, not to mention some messy politics in the distribution channel if you've been following that. We have been actively involved in mid-drive solutions for cargo ebikes with the Stokemonkey and varients, just not at the moment for regular bicycles.

Where do BBSxx and similar mid-drives shine?

There are a certain areas where bottom bracket middrive motors are hands down better suited than hub motors. Offroad mountain biking is one great example. The motor weight is low and on the unsprung frame so it has minimal effect on handling even in full suspension bikes. In these situations you are often going slowly uphill through trails with short steep sections and a small motor working through the drivechain in the granny gears of the bike can do this with excellent efficiency. Another example would be say fat bikes riding in sandy beaches or through fresh snow. These are areas where the bike is moving at lowish speeds through high resistance terrain, and the mid-motor in an easy gearing will do this with better efficiency than most hubs drives, while still performing just as well on the faster roads.

For us though, a majority of our customers are using their ebikes for daily use commuting, riding on roads where maintaining a steady speed regardless of the hill grade is important. For that requirement a mid-drive offers almost no advantage and we continue to believe that hub motor kits shine the strongest for reliable and low maintenance commuter ebike conversions, and that's the bulk of who we serve.

Here are a few benefits to a hub motor system to keep in mind and help inform your decision. Please don't see this as us taking sides and saying that hub motors are universally better than mid-drive motors, all we want to do is balance out the discussion a little by highlighting the many benefits of a hub motor drive which are frequently missing from popular discourse at the moment.

This point is often overlooked, but a hub motor has significant robustness in being totally independent of the human drivechain. If you've ever had a situation where a chain breaks, derailleur gets jammed, wet snow packs into the sprockets, freewheel busts apart etc. you become quite grateful that the hub motor can continue to propel the bike to get you home. With a mid-drive motor, anything that takes the drivechain out of commission stops the bike completely as both the motor and pedals become useless.

2) Less stress and wear on drivechain

With a hub motor bike, the use of the motor lessens the mechanical wear and tear on the chain, cogs, and derailleur system, since it decreases pedal stress that the rider would otherwise put on the transmission. A mid-drive motor does the opposite, putting much more force on the chain and cogs with the motor propulsion now added on top of the rider's input. A normal bike chain drive is fairly robust and can usually handle this extra load without failure, but will wear out at a much faster rate, requiring more vigilant attention to chain stretch, cog wear, shifter alignment etc. 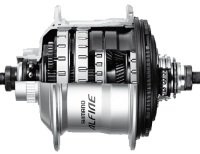 This is somewhat related to the above point, but one of the great innovations in bicycle hardware in the past decade has been the production of compact internal gear hubs that are 7-14 speeds with wide gear ranges. With a few exceptions (Rohlhoff and the original Nuvinci N171) these hubs are not rated for the extra stress of a motor drive and will usually have a short service life with more than an extra couple hundred watts from a motor. If you want to use a mid-drive with an internal gear hub, be sure to check whether the hub is rated for tandem and/or cargo use, most explicitly say no.

The transmission through your bicycle drivechain also limits the maximum motor power that can be coupled to the wheels. Power levels in the 250-750 watt range are usually fine just with increased wear and tear, but when you are looking for multiple kW of power then you start seeing catastrophic failures with snapped chains, sheared freewheels, broken spokes etc. A hub motor with a properly coupled torque arm has no such limitation. 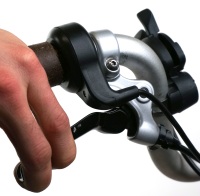 With a direct drive hub motor or a geared hub motor that has a locked clutch, the motor can act as a perfectly controllable brake that isn't affected by rain, pad wear, cable adjustment or anything like that. In a similar manner to how a hub motor reduces wear and maintenance on the pedal drive chain, it can reduce and even eliminate brake pad maintenance as well. You can easily do 90% of your braking electronically with only the odd emergency stop needing the mechanical engagement. On a mid-drive motor, there is really no potential for regen (unless of course you electrify a fixie, but we don't see much of that).

Admittedly the BBSXX systems and clones are pretty straightforward to install if you have bottom bracket removal tools and crank tools. But nothing gets quite as easy to fit as a front hub motor, where you are just taking off the original wheel and replacing it with a motorized one. In general we wouldn't emphasize this too much, as the time spent installing any conversion kit is way less than the time you save from riding it and you should install the system that is right for you. If you are concerned about installation and the facility of moving the assist to different bicycles and such, it's hard to top a front hub motor for minimal hassle. 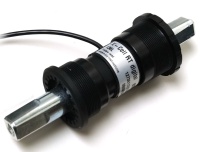 Because of the independent propulsion, the hub motor drive leaves any number of sensor technologies available for measuring rider pedal input, including chain tension (BeamTS), rear dropout (TMM4), Rear axle flex (eg BionX), and the many bottom bracket torque sensors (NCTE, Thun, TDCM, Sempu etc.). With a mid-drive, the motor couples through the drivechain so these sensors can'd distinguish pedal power from motor power, and so you are stuck with what the mid-drive system comes with which has so far been pretty limited. Some (like lightningrods and Tongsheng) have a torque sensing, while on the vast majority they are have just a basic pedal cadence sensor.

Now there is no reason why more aftermarket bbs style mid-drive can't have an integrated torque sensor, it's just that so far this mostly exists only on OEM bottom bracket drives like the Bosch. .

For a mid-motor to work well the rider needs to shift through the gears as they speed up and slow down, and similarly back off on the motor power while shifting to avoid seriously harsh shift transitions. This constant backing off and reapplying motor power between each change of gears can get taxing and results in some speed loss too, while with a hub motor you can continue to have uninterrupted power through all your gear transitions. There are shift sensor products to make these motor cutouts automatic, but there is nothing you can do if you come to a stop in a mid-drive system and forget to downshift first. The motor will start off in a high gear with low acceleration and efficiency. For regular cyclists this is probably no issue, but for those without that background, the simplicity of not having to shift gears all the time is one big appeal of an ebike. The rider can generally leave the bike in a high gear and use the hub motor to quickly get up to speed so there is no need to go through the motions of downshifting and up-shifting at each stop and go.

So, we hope that this sheds some more light on why we've largely stuck to hub motor systems since first becoming enamoured with the Crystalyte 400 motors in 2003. If you've read on websites or forums that hub motors are "yesterday's news" with poor efficiency and handling, and mid-drive systems are the only way to go for an ebike, perhaps you'll have a more informed outlook after reading this.

Mid-drive systems are not some new technology (most ebikes from the 1990's and early 2000's like the Merida Power Cycle and Giant Lafree were mid-drives), and hub motors continue to evolve to higher levels of power density, efficiency, and bike compatibility since they first rose to prominence in the mid to late 2000's.