The GMAC hub motor is a collaboration between Grin and MAC motors to produce a unique hub motor in the electric bike space: a geared motor with powerful regenerative braking, integrated no-play torque arm, and near perfect bike frame compatibility. We started this co-development in earnest in late 2017 along with Bike Swift and after much testing and refinement are happy to indroduce this hub in our 2019 motor catalogue.

The core motor performance is the same as you would expect from the latest MAC motors. That includes a modern cassette freehub system instead of a screw on freewheel and a powerful 20mm wide stator core made with thin 0.35mm laminations, but the following differences make it really stand out 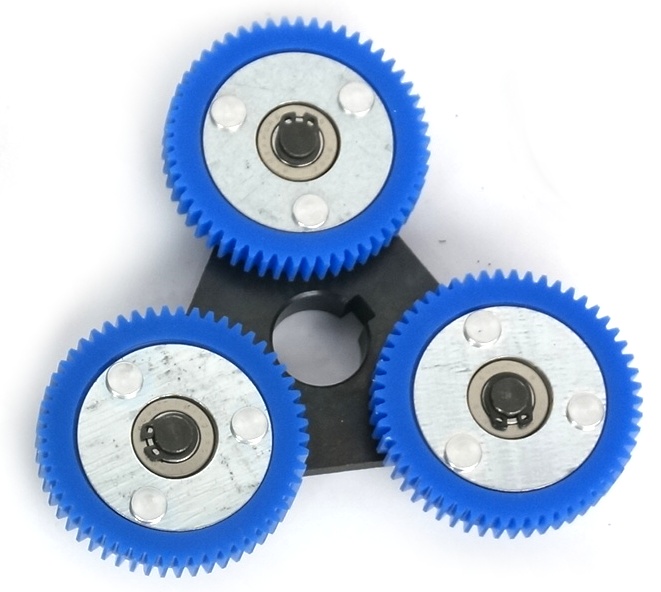 It's been the norm that geared hub motors have a built in freewheeling clutch so that the motor coasts in the forwards direction with no drag, but this prevents regenerative braking, reverse operation, and the clutch itself becomes a common point of failure with high torque motors. The GMAC motor does away with the freewheeling clutch entirely, allowing powerful and efficienct regenerative braking and one less component to fail. 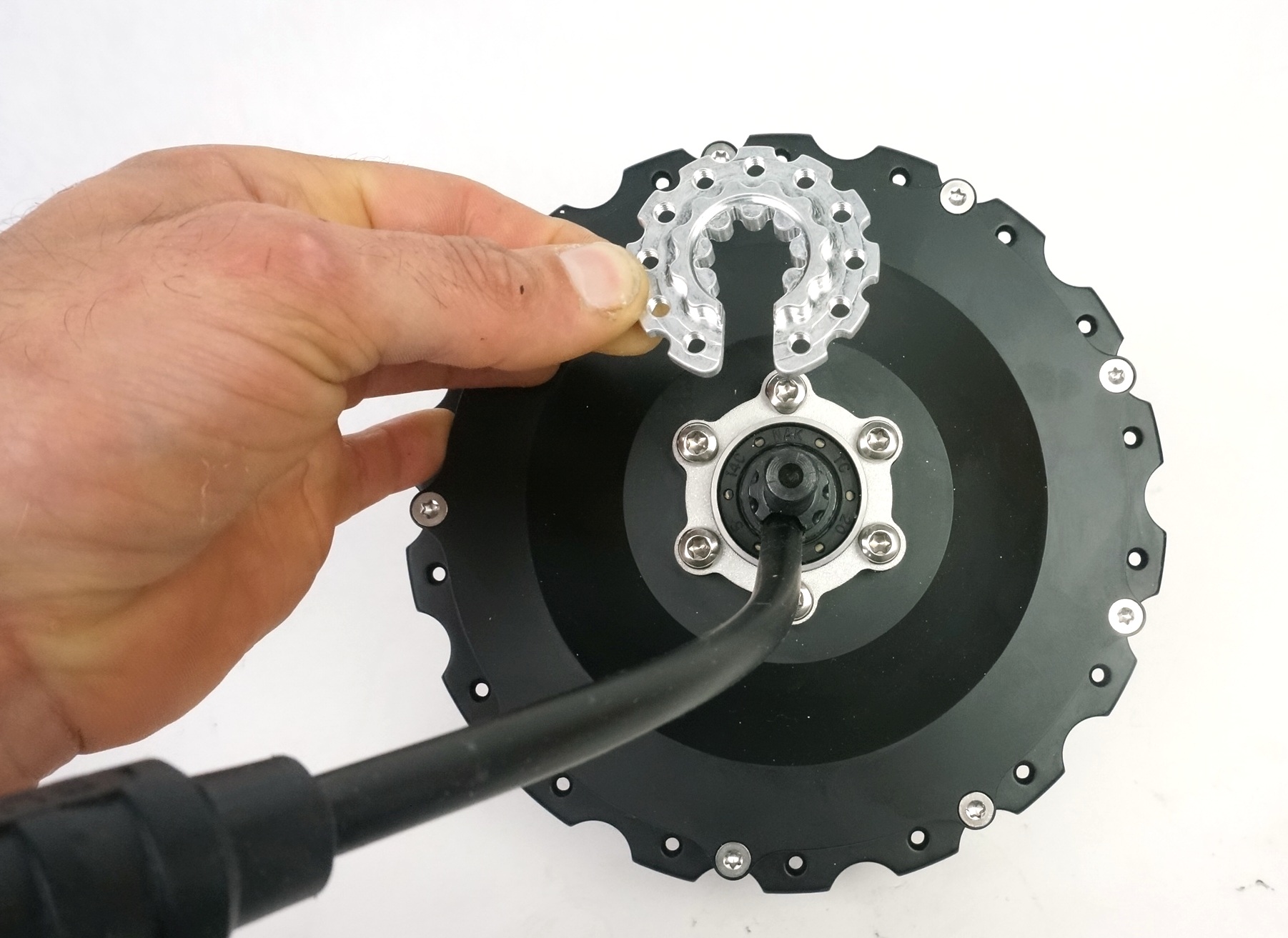 A powerful motor requires a strong torque arm, and a powerful motor with regenerative braking requires no play between forwards and reverse torque. We designed a splined torque arm interface inside the dropout which provides several times the spinout strength of the conventional axle flat approach, with a snug fit for handling torque reversals without any slop.

By placing the integrated torque arm inside the dropout slot, the remaining axle could be made to match the standard round M10 x 1.0 convention of bicycle hubs. This allows the motor axle to seat fully into a bicycle dropout slot with correct positioning of the disk rotor and cassette cluster, unlike M14 axles which locate the centerpoint about 3-4mm too low.

In conventional MAC motors the cable comes out the end of the axle, leaving it vulneratble to damage in accidents and complicating the installation and exchanging of axle hardware. Our design of the splined torque arms allows for a side cable exit that bends downwards out of the dropout slot, nicely shielding the cable exit from mechanical damage in any mishaps.

Finally, we've had these motor cables terminated with the 10 pin high current locking motor connector which integrates the hall wires, temperature sensor, internal speedometer sensor, and phase leads into a single reliable and water tight plug. The motor phase wire is heavy 4mm^2 copper (larger than 12 gauge) and capable of handling 100A currents for short times.

The primary use case for this motor was for heavy hauling applications and people riding on steep hills. These are scenarios where the motor is in use almost all the time, and the lack of freewheeling is not an issue since the rider is rarely pedaling the bike unassisted. Traditionally this application involved a toss-up between choosing powerful geared hub motors or mid-drives for good efficiency at low speeds and high torques, and giving up on regenerative braking, or using a large and heavy direct drive motor for regen but at the expense of reduced efficiency on the slow climbs.

The GMAC motor eliminates this trade-off, providing a relatively light motor option that has good low speed torque and efficiency plus regenerative braking that is nothing short of amazing. In cargo applications where riders will be frequently burning through brake pads, this hub is a game changer for reducing system maintenance and improving vehicle handling.

The GMAC motor without a clutch has a no-load drag that varies from 1.0- 1.5 Nm with sheel speed, which is more than a typical direct drive hub motor (0.6-1.0 Nm). For most riders this would be a detectable amount of extra resistance when pedaling the bike, and it's one of the reasons that geared hub motors have all tended to have a freewheel built in.

However, even if you are pedaling the bike without assist, the energy that is expended overcoming this rolling drag will typically be less the energy recaptured from regenerative braking, as we've been explaining for well over a decade. This means that the motor can be run all the time at low powers to overcome the rolling drag and feel like it is freewheeling, while using less total battery energy comared to having an actual freewheel and no regen. This "electronic freewheeling" function is available in the Phaserunner and Baserunner controller series and can be activated via the V1.1 and later software suites.  For an example of this in action see this video here.

With this feature avaialble we can confidently say that the GMAC motor is a great choice even for commuter and touring applications where a freewheeling hub is considered vital for many people, since as long as there's a battery on the bike it can be made to feel just like a freewheeling setup.

We stock the GMAC motor in two winding speed options which should cover all bases; a standard 10T wind (8.1 rpm/V), and a fast 8T wind (10.2 rpm.V). In general the standard wind is  mostly used by 26" and larger wheels while the faster wind is for smaller 20" wheel sizes, but it is perfectly fine to choose lace any winding in any wheel size depending on your desired speed for a given battery votlage.  The fast winding option is great for those who want a peppy system while sticking with the common 36V battery packs.

We do not carry MAC's slow 12T motor winding as it provides no performance advantage given the large size phase wires available; you can get just as much continous torque out of the 8 and 10 turn windings. At the other end, full torque output from the very fast 6T motor requires more phase current than the Phasernuner can supply on a continuous basis.

Like all electric motors, the power output capability of the GMAC depend on the RPM at which the motor is being run, the amount of air cooling available, and the ambient temperature. The table below shows the expected power capabilities assuming room temperature atmosphere and a passing airflow consistent with the wheel being laced in a 26" wheel. The continuous rating is the power that will result in a steady state motor core of 110 oC, while the 5 minute rating is the power level it can sustain for 5 minutes starting from 60oC before the core reaches 110 Celsius.

For a more detailed understanding we recommend using our motor simulator or trip simulator applications to properly predict the capability of this motor in any specific usage scenario.

The GMAC motors are available as stand alone hubs, or as part of a kit with a Baserunner_L10 motor controller.