NOTICE: We Are Closed for Moving
January 18th - 24th
See Blog for Details

Our big migration is moving along like clockwork, and we look forward to easing back into normal business by the end of next week.

We decided to discontinue manufacturing the Cycle Stoker kit in 2017. We were glad to have helped a number of people electrify their cargo bikes with this unique system and collectively travel 10's of thousands of km, but it also highlighted for us the many downsides to mid-drive bike setups in terms of accelerated wear on mechanical components. We continue to have decent inventory on hand of the 16T cogs and terracycle idlers in order to support these existing setups well into the future. For most cargo applications where we might have suggested the Cycle Stoker in the past, we would highly recommend looking at the GMAC kit. 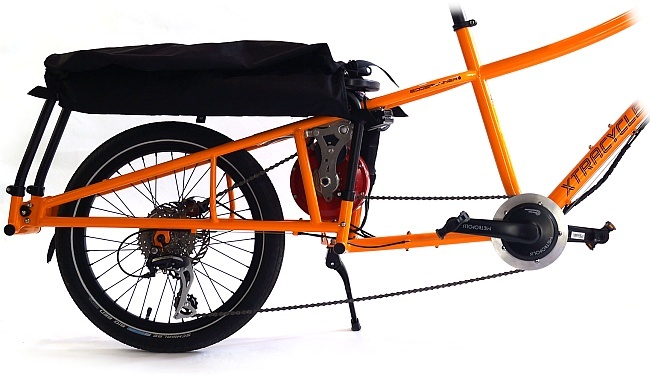 The Cycle Stoker is a mid-drive electric assist system for Edgerunner and Yuba Mundo cargo bikes that we developed in early 2013. The design uses the same core components as the classic Stokemonkey system, but it runs a single chain on the right along with a freewheeling patterson crankset to allow motor operation without forcing the pedals to turn.

By clever use of the chain angles and idler pulley locations, we are able to sense the rider's pedal torque via a strain gauge on the mounting bracket and display actual human power output on the V3 Cycle Analyst. This intrinsic torque sensing capability allows for proportional torque control of the motor power level, a feature lacking from the majority of aftermarket mid drive systems.

There are lots of hub motor and mid-drive options for converting a cargo bike to electric assist, and for many people any of these other kits will be more than adequate. But if you are after a system that can turn heads and fulfill some special needs in the cargo ebike space, then this kit might be ideal for you. Here are the things that make it stand out:

Our own experience is that for cargo bikes, probably 80% of users would have their needs met more than adequately with a high torque geared hub motor, like the eZee hub motor kits or other large geared motors in this power class (BMC, Bafang BPM series etc,)

Where the mid-drive setups shine is when your trip spans a wide range of speed requirements, going slowly up really steep hills with a heavy load, and similarly going fast on long flat sections and downhills.

How Fast and Far will it go?

These are some of the first questions people want to know and also the most irrelevant in a sense. Being a mid-drive system, the Cycle Stoker is able to provide assistance to the bike over a very wide speed range, whether you are slowly grinding up a hill or flying down it at traffic speeds. But the total power from the motor is limited to about 550 watts at 36V, and 750 watts at 48V. That power limit will determine the ultimate speed that you can achieve in a given weight vehicle and grade of hill.  For instance, climbing a steep 10% grade hill with a 250kg vehicle at just 20kph requires 1500 watts of power. If all you have is 750 watts, then expect to go up at more like 10 kph instead.

For the range, that is simply a function of the capacity of the battery pack that you choose. A battery with twice the amp-hour capacity will have twice the range per charge. You may or may not have better energy usage with a mid-drive over a hub motor, that would depend a lot on the circumstances, and the general rules of thumb for wh/km in our battery page apply. .

Will it fit on my bike?

At the moment, we have clampsets for this system on the 2012 and 2014 Edgerunner frames as well as the Yuba Mundo. We developed a system for the Bike Friday Haul-a-day as well, but then their frame design changed to include diagonal cross tubes which interferes with the motor it.  We have plans to produce a model for the Surly Big Dummy.

There are two winding options for the Stokemonkey motor, and standard 9 turn wind (8 RPM/V), and a faster 8 turn winding (~9.2 rpm/v). We recommend the faster wind motor with 36V battery packs, and the standard winding with 48V batteries, to provide a good match of the unloaded motor RPM with a normal riding cadence. If you use the standard wind motor at 36V, you might find that the motor only provides adequate torque at low pedal speeds. Similarly, If you like to like to spin the cranks at a very high cadence (>110 rpm), then you might want to use the fast winding at 48V.

Will it work with other cranksets?

We do not recommend using a regular non-freewheeling crankset, as any time the motor is powered when the pedals aren’t turning there will be chain slack between the motor and cranks causing the chain to fall off.

Can I purchase without the CA, torque sensing etc?

It is possible to run the Cycle Stoker using just throttle control and no Cycle Analyst or torque sensing, although you then miss out on some of they key benefits of this system. For that, please contact us directly about doing a modified kit.

Does it require a Nuvinci Hub? What other hubs can I use?

We had our first run of Cycle Stoked Edgerunner Ebikes built up with Nuvinci hubs on the rear, and the combination works quite well allowing for an infinitely adjustable gearing that can be shifted under load. However, the lower efficiency of the Nuvinci transmission (~85%) somewhat negates the motor efficiency benefits of a mid-drive system.

We will usually pre-load the Cycle Analyst for torque control mode with a 3 position switch to set between 0%, 50%, and 100% assist levels. However, several settings must be customized with each installation because of unit to unit variations in the torque sensor.

The idea behind the Cycle Stoker drive layout came from varied discussions with Todd Farhner, the inventor of the original Stokemonkey. While brainstorming ways of to have the stokemonkey motor drive a right side chainline, we realized that with minimal modifications, the stokemonkey bracket could take an idler pulley that would allow for proper chainwrap around the counterclockwise spinning motor. And that, with some updates to the bracket attachment point we could potentially measure the rider’s pedal force with a stationary strain gauge.

We built several prototype bikes in early 2013, and then field tested one of these on a Vancouver to San Francisco ebike trip before bringing it into tentative production by the end of the year. Both the trip and the design and development details are documented on this endless-sphere thread. For most of 2014 we were selling the Cycle Stoker only pre-installed on Edgerunner bikes with a Nuvinci hub drive in order to work out the design kinks, prior to adapting it to the somewhat different frame geometry of the 2014 bikes and releasing it as an independent kit.