REPLACED FOR TIME BEING WITH FRANKENRUNNER: Due to electric chip shortages, we've been out of stock of Phaserunner controllers since the fall of 2021 and will not be able to resume production until the end of 2022. However, we have introduced a slightly larger but functionally equivalent substitute with the Frankenrunner, see the info page here.

The Phaserunner is a compact state-of-the-art field-oriented motor controller (FOC) from Grin Technologies based around the sophisticated control electronics from Accelerated Systems Inc. of Waterloo. It is ideally suited for running brushless motors for electric vehicles in the 500-2000 watt power range, and once you have experienced the smooth response of a FOC with a torque throttle it's hard to go back to a the setup you had before.

This controller was designed as a universal device that can fit on almost any bicycle frame and handle almost any motor system. You can power it from a 24V battery or a 72V battery, and run your phase current to peaks of over 90 amps, though the continuous current capability without additional heatsinking is typically 45-50A. The wiring is pared down to the bare basics for a nice clutter-free installation with two models for different applications. The Phaserunner_L10 has a cable exit for compatibility with all the motors supplied by Grin with the L1019 connector, while the Phaserunner_MT is connectorized for separate cable harnesses between the controller and motor.

Both models of the V3 Phaserunner use the same connectors for the Battery, Cycle Analyst, Throttle, and Communication plugs, but they differ in how they hook up to the motor. 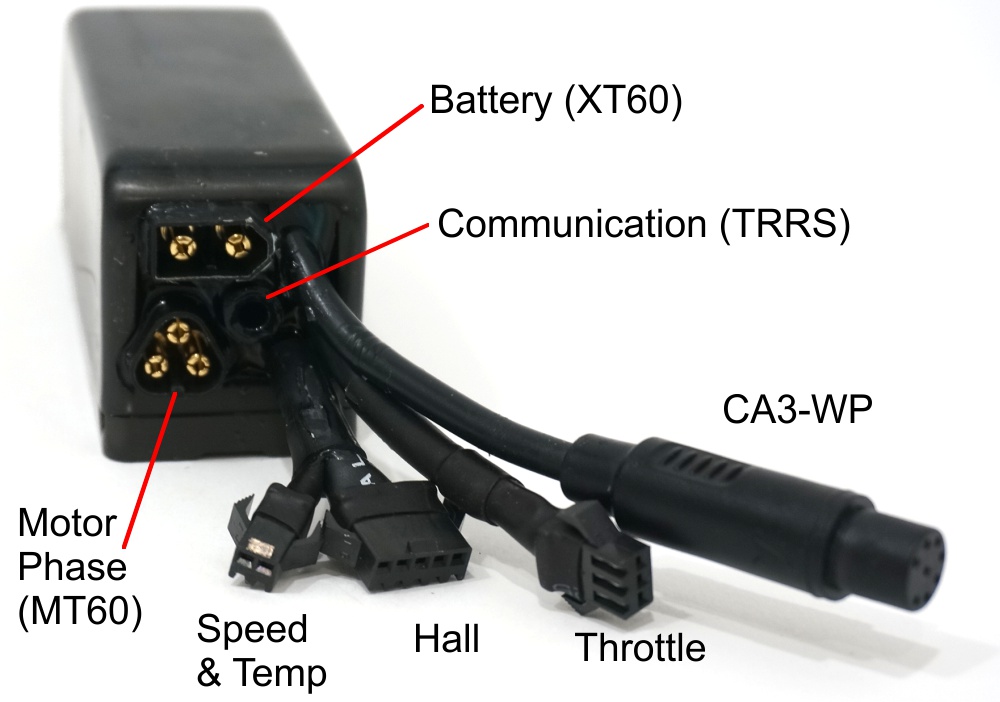 The only additional wire on the Phaserunner_L10 is the motor cable, which is 52cm long and terminated with the female L1019 plug for a rugged connection to Grin motors that use this connector standard

On the Phaserunner_MT, the hookup between the motor and the controller is done via 3 separate plugs rather than through a single cable with an over-molded connector.

With the Phaserunner_MT, we provide the following optional motor cable harnesses for different motor applications. The Anderson terminated cable is compatible with our hub motors sold from 2019 and earlier and is recommended for 3rd party motors for which there isn't another compatible plug type

There is also a version for Android that is in development, and available for beta testers on the Google Play Store. This requires the use of a USB OTG compatible device, as well as a USB OTG adapter to connect our USB->TTL programming cable to the micro USB or USB-C connector present on most smartphones.

The drivers for the FTDI chipset inside the USB-TTL adapter can be found through FTDI here - https://www.ftdichip.com/Drivers/VCP.htm

The Phaserunner project started off with a meeting of the founders of ASI at the Taipei Cycle Show in 2011 which led to an eventual collaboration to take their well-engineered OEM motor controllers and properly package them to be better suited to the aftermarket and DIY ebike scene. A lot of the background and product evolution can be seen in our original thread on Endless-Sphere. 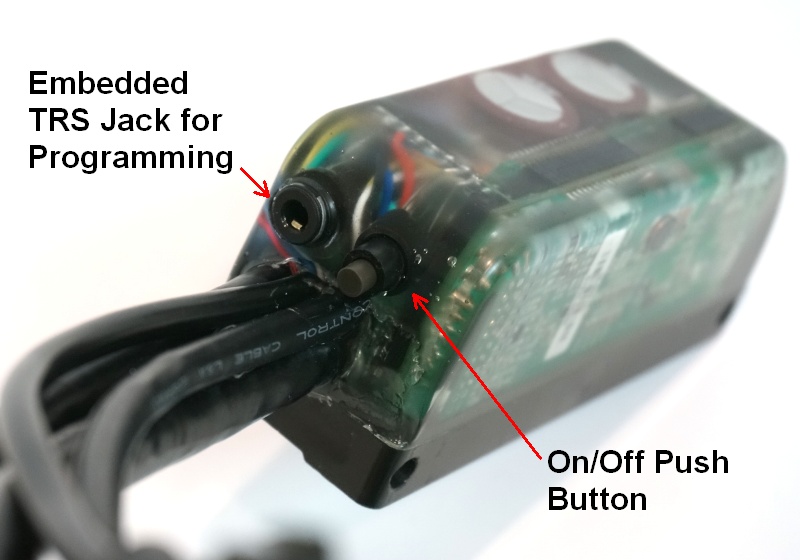 The V1 Phaserunner involved a rearranged board layout for a narrower profile, it increased the voltage range to be compatible with 72V batteries, and it did away with the CNC machined enclosure in preference for a clear potted finish. This model had an integrated on/off button on the back of the controller and had cast in place battery and motor phase cables.

The V2 Phaserunner was produced from 2016-2019 and introduced the connectorized back-end with MT60 and XT60 connectors molded in place. The integrated on/off button was removed. In early 2019 we switched this design to using a stamped metal shell instead of a bare resin finish so that we could switch to a lower durometer potting resin that would put less thermal stress on the components. An option for the L1019 model was introduced at this stage too.

Finally, our V3 Phaserunner can be readily identified by the use of the WP8 Cycle Analyst plug instead of the 6 pin JST plug. Otherwise it looks very similar to later model V2 Phaserunners that used the stainless shell.

Most people are able to set up and tune the Phaserunner with relative ease using our software suite and following the direction in the user manual. Here are some of the more common troubleshooting issues that we have run into doing tech support.

Controller Not Turning On:The most common reason for this is that the on/off switch wiring is not wired up to turn the device on. As mentioned in the V3 Phaserunner Updates document, by default now the on/off switch wires of the controller are not shorted together. In order for the Phaserunner to turn on when battery power is applied, either a CA3-WP device needs to be plugged in and the MFSwitch turned on, the on/off wires under the throttle heat shrink are hooked together, or the WP8->JST adapter is plugged in which shorts together the V+ and Key pins of the WP8 plug.

Motor Not Detected During Autotune:  The most common reason for this error is not that the motor is disconnected (though that will do it), but rather communication errors or delays between the software suite and the Phaserunner device. It will happen consistently if there are two instances of the Phaserunner suite open on the computer at the same time, and can also occur if there is significant electrical noise interference (noisy power supply instead of battery powering controller) on the communications cable, or if the computer is running the wrong virtual COM port driver. MAC computers are especially prone to this latter problem. If you are experiencing these issues with the V1.0x software we recommend updating to the latest V1.3 release as that has fixed a number of potential communication problems.

Instantaneous Phase Overcurrent Fault (2-2 Flash): This is a fault that typically occurs when there is a sudden change in the motor eRPM (such as hitting a pothole, or the motor transitioning from open loop to closed loop sensorless operation), and it usually means that the current regulator bandwidth and/or the PLL bandwidth are not high enough to track the dynamic motor response. Increasing both the PLL and Current Regulator in tandem will usually result in a setting that doesn't result in phase overcurrent faults. In some cases where this tuning alone is not sufficient, then the current regulator Ki and Kp terms can be adjusted independently.

POST Static Gate Fault (1-8 Flash): This fault occurs if there is some stray electrical conductivity detected between one of the phase wires and either the V+ or GND bus. It will occur if there is a blown MOSFET, if the motor wire is nicked at the axle and is shorting a phase lead to the motor casing, or if is water ingress inside the motor causing paths for electrical connectivity with the phase wires. If this message shows up, disconnect the Phaserunner from the motor, apply the throttle, and look at each of the phase open circuit voltages from the edit parameter menu. They should be around 0.5 Vnom. If you see a value of 0.00 or 1.00 Vnom, then it usually means there is a damaged MOSFET. If there is a value more like 0.2 or 0.8 Vnom, then you can increase the open circuit test window from the default of 0.25 up to about 0.4 and then it will operate fine again.

Damaged XT60 Connector: We've seen several instances with high-power rigs where the XT60 plug for the battery cable has become badly damaged from arcing, sometimes even melting the contacts. The battery current draw on the Phaserunner is much lower than what the XT60 contacts are rated for, so we believe that this failure is mostly the result of mechanical stresses on the battery leads pulling the connector at an angle and causing interruptions and arcs in the power flow. It's possible to spread apart the 4 tongs of the male pin for tighter mechanical contact, and we recommend ensuring that the battery cable is not being tugged (eg by cable ties) in such a way that it pulls the connector at an angle. Instead, the battery connector/cable should float freely so that it stays aligned and in good contact.

We posted a fair amount of our test data in the endless-sphere forum during the development and initial pilot roll-out of the Phaserunner controller, and we've highlighted some of this data here:

AVAILABILITY NOTICE: As of Sept 2021, we are completely sold out of all Phaserunner_L10 and Phaserunner_MT motor controllers, and due to the global semiconductor shortages we are unable to secure more circuit boards until late Summer of 2022.  We apologize for this supply disruption. When we re-introduce the device, it will be an updated V6 model that matches the plug and connector standards adopted with the V4 Baserunner Units.