The battery grinspector is a battery test station designed specifically with ebike shops and dedicated DIY builders in mind. Unlike bulky rack mounted commercial testers used in industry, the Grinspector is just a small base station controlled by the familiar Cycle Analyst device running a custom firmware. You simply plug in your battery, a charger, and an appropriate load for discharging the pack and the Grinspector software will allow you to cycle charge and discharge the pack while logging the results on a computer.

This provides you with the pack's available capacity in amp-hours and watt-hours, internal resistance, and a graph of the discharge curve profile. For ebike shops it can serve as a means of doing quality control on inbound batteries and for troubleshooting and warranty testing customer packs. As an added plus, you can set the station to automatically recharge the batteries to 30% capacity at the end of the test so that they are in the ideal state for shipping or storage.

Because the charging current does not flow through the same circuit with the shunt resistor, the Cycle Analyst is not able to see the actual charging amps flowing through the pack, but it can see the voltage on the battery, and it can terminate the charging if this voltage exceeds a certain level.

Finally when the CA output is close to 2.5V, then the device is in an off state, and the battery is neither charging nor discharging. In use, our computer software will tell the Cycle Analyst to charge the battery for a given amount of time, and then discharge the battery until the voltage reaches a low voltage cutoff, then recharge the battery. This cycle can be set to repeat automatically as many times as desired, and the load can be changed in between cycles to run the discharge at different currents. 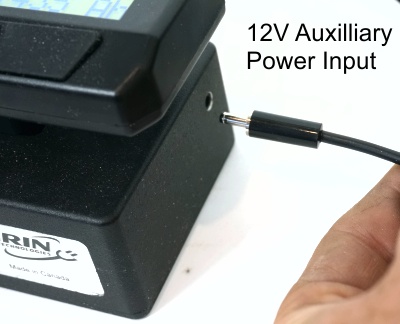 The Grinspector will power up automatically when the battery is connected and it can run the full suite of discharging and charging the pack while being powered from the battery under test. However, if a lithium battery is discharged to the point where the BMS circuit trips and the pack shuts off, then the Grinspector device will lose power and shut off as well. To deal with that situation we have also provided a 12V power port on the side of the enclosure to keep the Grinspector powered on even when the main battery pack has no voltage. We offer a convenient USB powered 12V supply that can be used here and plugged into the same computer that is running the testing software.

The Grinspector station itself does not have the ability to absorb the energy from the battery pack as it discharges; instead it is relying on external loads for dissipating the energy. We offer a smartly chosen 6.8 Ohm 400 watt load resistor for this application. This will drain a 36V battery at about 5 amps, and a 48V battery at about 7 amps.

DISCLAIMER: These 6.8 Ohm load resistors are only rated for up to 52V nominal battery packs and will get exeedingly hot and smelly at higher voltages.  For testing 60V or 72V packs you need to connect two resistors in series to create a higher 13.6 Ohm load. 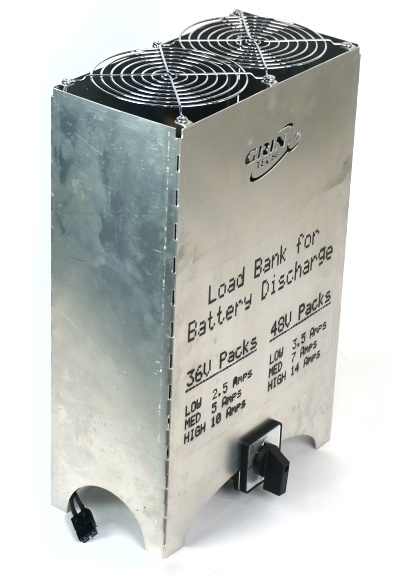 You can then stack resistors in parallel to increase the discharge test to higher and higher currents, or in series for lower currents. The Grinspector will allow discharge testing at up to 35 amps this way. Be aware that load resistors will get extremely hot (over 300 °C) and should be kept away from any surfaces that would be sensitive to heat.

Because of this, we also manufacture a vertically stacked Dual Resistor Load Bank with a rotary switch that lets you flip the resistors in series, parallel, or independent. With a 36V pack it provides 2.5A, 5A, and 10A test currents, while a 48V/52V battery can be discharged at 3.5A, 7A, and 14A. The chimney style design provides enough air flow that the enclosure casing remains just warm to the touch even while the resistors are roasting hot.

It is also possible to hook up an active electronic load to the discharge port of the Grinspector if you want to test the batteries at programmable constant currents. 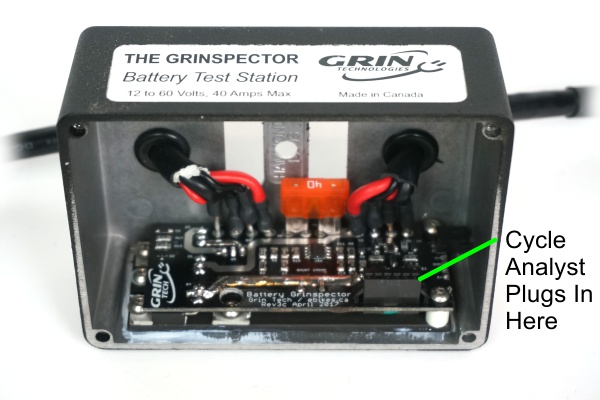 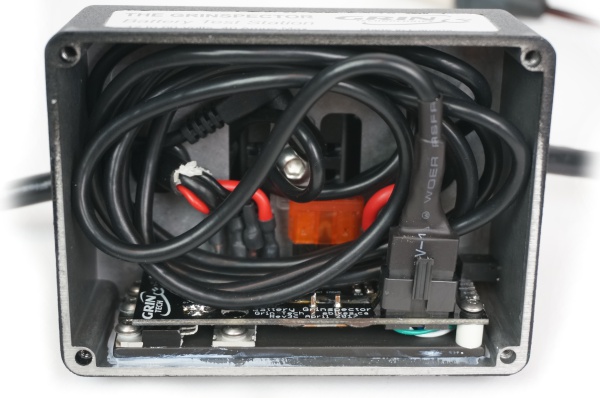 The custom Grinspector firmware is available for download here.

New, Download Grinsepctor 0.5 Firmware (CA3 devices only, please use same CA Update Utilty program below for flashing, rather than our CA Setup software)

You can use the CA Update Utility to install this firmware on your CA device. If you are reusing an old Cycle Analyst for this purpose, then you will need to reset the RShunt back to 1.000 mOhm. Otherwise though all the settings should be left at their default values after flashing. The custom firmware has a reduced set of menu options and display screens. The primary screen shows the expected information on the battery (volts, amps, amp-hours etc.) while also displaying the current State of the Grinspector (charging, discharing, or off) .

The Grinsepctor enters the associated modes when it receives the characters 'C' for charge, 'D' for discharge, or 'O' for Off, via the communication port.

The current Grinspector software is available here, and has recently (April 2020) been updated from scratch with many new features. It is not a resource intensive program and we recommend having any old laptop or PC put to use as the dedicated test station computer. The software lets you preconfigure all aspects of a battery test. You can save these settings as saved profiles to recall them quickly.

Linux build will be coming soon.

The original (windows only) Grinspector software which was written in Python is still available for archival or troubleshooting purposes here.

Our software tool allows multiple Grinspector base stations to be hooked up and controlled from a single computer, so that shops can independently test a number of battery packs at the same time. To facilitate this, each Grinspector base station can be assigned a unique ID number that shows up on the main screen, and this lets you identify which device is which. The software application then allows you to add any number of new stations by clicking the "add test station" button. It will automatically scan available COM ports on the computer and see if a grinspector is hooked up, and if so add the device to the list. At Grin we have a bank of 5 Grinspectors that allows us to fully discharge test every battery pack before we send it to a customer, and leaves us with sufficient spare testing capacity for checking the status of old packs in for service and repair. 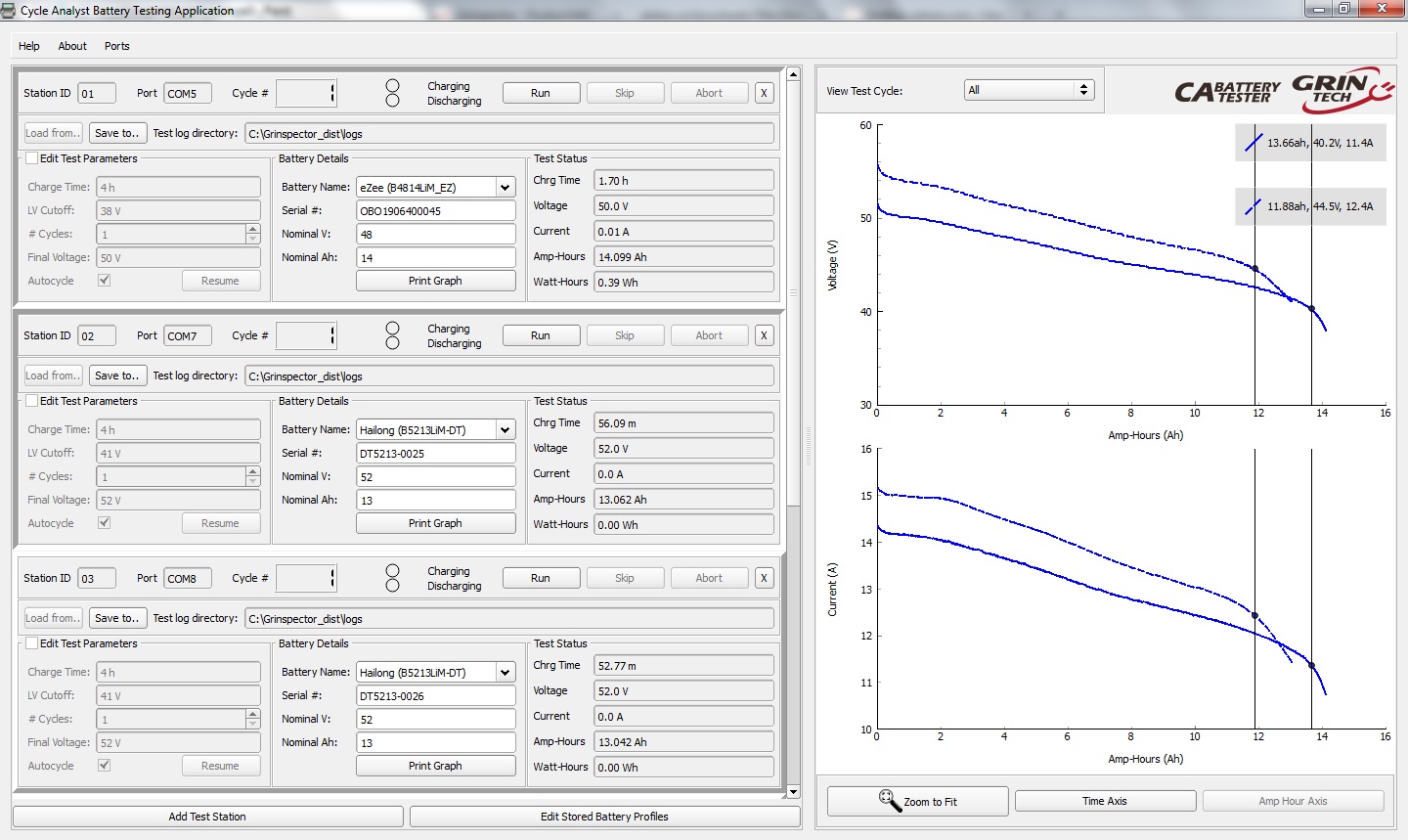 Here is a video tutorial detailing how to setup a battery discharge with a Grinspector, including an explanation of the load bank, charger, and software settings:

We first publicly demonstrated the Grinspector at the 2017 Taipei Cycle show and Bruno created a nice little high energy video of that here: