Grin's modular LiGo battery was born in response to the massive transportation restrictions placed on large lithium ebike packs. Properly certified batteries under 100 watt-hours are even allowed aboard passenger aircraft with your carry-on luggage. Why not use this as the building block that can be easily re-assembled into a large battery?

After much design consideration we decided to implement this as a flat 10s x1p 18650 cell layout, with every battery having its own independent BMS circuit and each pack being potted to protect against the elements. 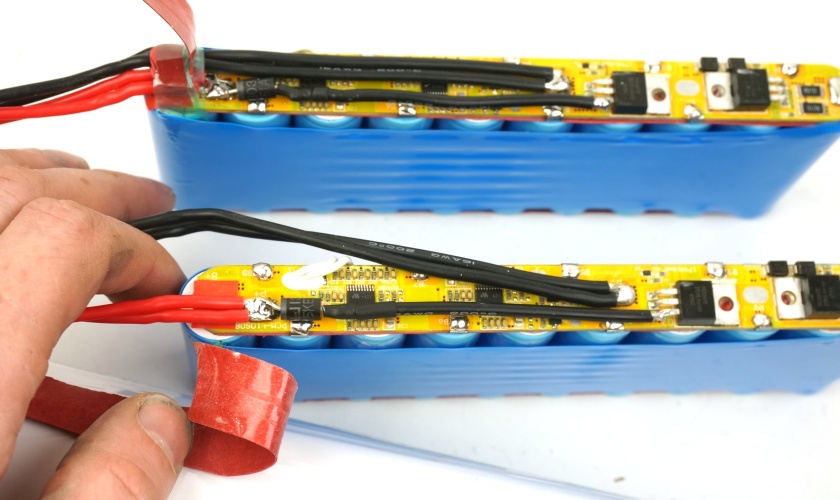 In early 2014 we had a number of 10sx1p batteries made up with an overseas pack assembler running a basic BMS circuit and covered in shrinkwrap, using what were at the time state of the art 25R Samsung cells (for 92 Wh total). That proved the concept and let us validate the process of travelling on numerous international flights with our small battery modules, which were then stacked together on landing into a usable capacity ebike pack.

These little batteries proved useful not just on ebikes but also countless other projects too, from electric skateboards and unicycles that we took to events to portable power for camping trips and even LED boat lighting. However, we also hit many limitations with the imported units, ranging from environmental damage to randomly erratic BMS circuits to cell balancing issues. It became clear that we needed to take both the design and manufacturing in-house, and in 2016 this project picked up in earnest.

Our completed LiGo battery packs have more functions than you likely thought possible in a battery pack.

Each battery has two pairs of + and - leads on them, which are terminated in Anderson Powerpoles. That allows you to easily plug a number of packs together in parallel, and when you are done you have two Anderson connectors left over. Typically one goes into the controller and the other could run lights or act as a charging port.

Each LiGo has one momentary button for control and a row of 5 multicolour LEDs to convey info on the pack.

Press and Hold - ON / OFF Control

In order to turn the battery on, press and hold the button until the first LED goes green, then on releasing the button you will see the green LEDs light up all the way and show the batteries current charge level. The top LED will then show a green heartbeat pulse letting you know that the battery pack is on.

To turn the battery off, press and hold the button again until the first LED goes red. Then on releasing the button, an animation of red LEDs will scroll down telling you that the pack has turned off.

In addition to the turn on and turn off animations and the heartbeat, the LEDs on the LiGo communicate other states or fault conditions

When we initially developed the LiGo battery modules, the shipping regulations allowed up to 20 batteries in the 20-100 Wh power range to be sent in a single box without any dangerous goods fee. Unfortunately, the DG regulations changed in April 2016 to limit this to just two batteries in a single shipment under PI-965-II. 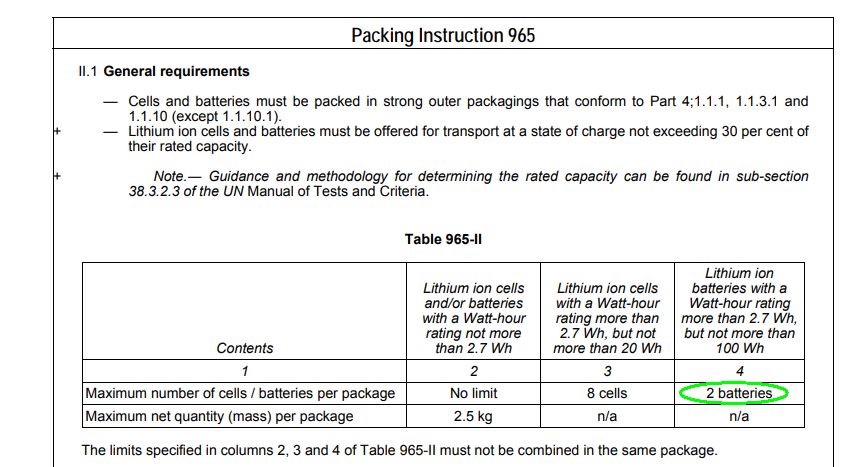 Then for reasons that were never fully explained to us, in 2017 most of the carriers (like DHL, Fedex, UPS) decided to stop accepting packages sent in this provision, requiring all shipments of pure LiGo batteries required the Dangerous Goods fee.

The situation has remained much more favorable though for LiGo batteries that are are shipped along with a motor controller and conversion kit. Batteries sent this way are considered to be packed with equiment and are shipped under UN3481 ,which allows up to 5 kg of LiGo batteries (8 pieces) to be sent with a kit without any dangerous goods fee.

Yes, these batteries really can be carried on passenger aircraft in carry-on luggage. Both we and our customers have clocked hundreds and hundreds of flights with LiGo batteries going through security without any incidents. Aaron even caught on video what happens when LiGo batteries go through the scanning belt. We recommend removing the LiGo packs from your baggage and plugging the pair of anderson connectors on each pack into each other, so that there are no exposed terminals and each pack is clearly individually contained. Airport personnel have been well trained at looking for the watt-hour rating lithium batteries and seeing if they are compliant or not.

While most airlines do not have a firmly defined maximum number of batteries under 100 Wh that can be brought aboard, we'd suggest travelling with no more than 4-5 LiGo's per person in order to avoid extra scrutiny. We have had customers travel by air with as many as 12 LiGo modules on them, but we wouldn't recommend that as a matter of course. Furthermore, if you are asked what the batteries are for it's better to say it's backup power for camping, running bright bike lights etc. than to say it's for powering an ebike. Some staff may have been told that ebike batteries are not allowed on planes because they are (almost always) well over 100 Watt-hours.

Unfortunately several key IC's used on the LiGo BMS boards became impossible to source in 2021 due to the semiconductor shortages. We had enough stock to produce one final batch of 2000 BMS boards for LiGo and LiGo+ batteries over winter, and sold the last of these in July 2022.

We plan to replace the original LiGo and LiGo+ batteries with a new design based around different IC's which we have dubbed the LiGo 10X. This design uses a squatter 3x4x3 cell layout with embedded XT60 connectors for easier connectivity, and incorporates rail tabs for mechanical attachment to a bike frame. Pilot production is expected in late 2022 with general availability in 2023.  You can see a preview in this early video pitch we made for a (failed) grant application.