November 19, 2013| Posted in News| Justin Lemire-Elmore| 31
All of the 20,25, 35, and 40A controllers are in stock and have the same universal sensored/sensorless behaviour with automatic hall mapping and dual levels of regen. The controller store page info has been updated with complete details of the new specifications.

We also have some miniature 15A controllers suitable for the small geared Tongxin/Outrider hubs, and are releasing a set of kit packages based around these motors and controllers in a new 'mini geared kits' section of the store site. Next in the works on this front are narrow 80mm wide motors with roller gears for folding bicycles.
Read More 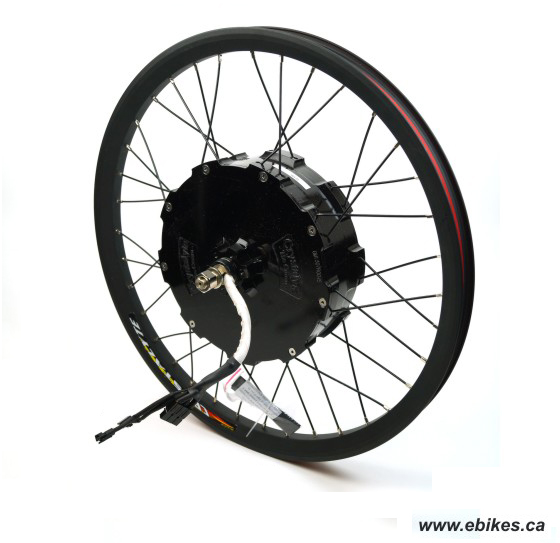 We have a few additions on the Crystalyte motor front. The popular H3540 and H3548 we have now available unlaced for those planning to do custom wheel builds. This also reduces the shipping cost substantially for orders going overseas. And the powerful Crown motors are in stock again, including in a 24" rim size which plays nice with fat tire bikes.
Read More

November 19, 2013| Posted in News| Justin Lemire-Elmore| 31
There have been a few updates to note in our line of eZee conversion kits.

Better Gears: After dealing with occasional random failures of the injection molded nylon gears in the eZee motors, these are now all being machined from a higher grade of gear stock. Depending on the batch we would sometimes see upwards of 2-3% failure rates on the molded gears, while so far there hasn't been a single tooth failure on the machined units.

Thinner Laminations: Another update was made to the motor core itself. Instead of using 0.5mm thick laminations, they are now produced with thin 0.35mm material. This results in lower eddie current losses, lower unloaded currents (~1.8A vs. 3.2A) better efficiency (82% vs. 78%), and less motor heating. The simulator has been updated to reflect the new performance.

Black: The rear motors are now all powdercoated black as standard. The front hubs are still a machined aluminum finish.
Read More

November 19, 2013| Posted in News| Justin Lemire-Elmore| 30
After some supply difficulties at the end of fall we're now in a rare space of having almost everything we offer on hand and ready to ship. From Crystalyte HS and Crown motors, to front and rear eZee kits, to a whole new updated controller supply. We finished building a custom enclosure for our CNC machine and it is busy churning out battery rails and related hardware. 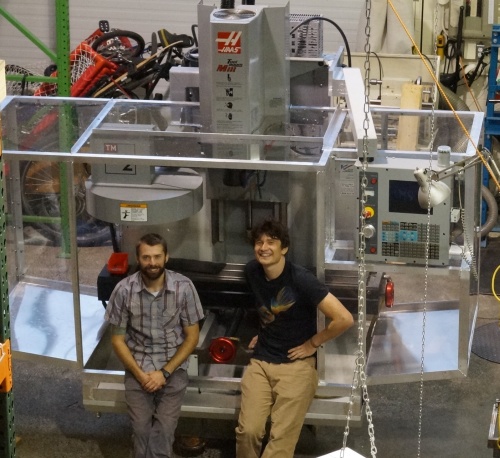 November 12, 2013| Posted in News| Justin Lemire-Elmore| 29
Every few months there are a few new items that have made it through the long journey from idea to production and are ready for announcement:
The Stand Alone Anderson Powertap
We are now offering a stand-alone version of the Anderson Powerpole tap that used to be a termination option for our LED lights. This handy cable plugs inline between your battery and controller and brings out a fused link to the battery voltage for running lights, DC-DC converters, audio amps, or what have you.
Cycle Analyst Security Screws
Some people have expressed concern about the Cycle Analyst or Lumenator lights getting stolen from their handlebars. Although we haven't heard many instances of this happening, we've sourced a set of security screws that can replace the Allen and Hand Turn bolts on the bracket so that these can't easily be undone.
Mini Geared Motor Kits
After a successful testing phase we're now offering for general sale a small geared hub motor for those for whom the powerful eZee kits are overkill. We settled on a 2.4 kg motor from Outrider, and have it stocked unlaced in both a standard (7.8 RPM/V) and fast (10.8 RPM/V) winding. These motors are available independently, or as part of an unlaced kit with 20A controller, CA, and spoke set.
Rolling Jackass Stand
Those who ride cargo bikes very quickly appreciate the value of a rugged centerstand for holding the bike stable while loading and unloading. The Rolling Jackass, invented by Val Kleitz and manufactured in Seattle by Haulin Colin, takes the cake for being the best of the best. This clever stand deploys with a handlebar lever so you can stabilize without getting of the bike, and fits the Edgerunner bikes just perfectly. We picked one up from Colin while riding down the coast and were so pleased that we had to stock them.
Dual Sensored/Sensorless Infineons, with Dual Levels of Regen Too
Our stock of 20, 25, and 40A Infineon Controllers has now been updated to run in both sensored AND sensorless configurations. So if the hall cable is not connected, they will automatically engage in a self starting sensorless mode, and if the halls are later plugged in the controller will automatically map the hall table and run sensored so that you don't have to play around with hall/phase pinout combinations.
As well, we now have them made with two levels of regen intensity to accommodate those who want maximum stopping power, as well as those who want regen current but want to keep it low to prevent damage to the battery or tripping a BMS circuit. There is an extra wire loop that can be snipped to double the electrical braking force if desired.
THUN Sensor
After a long backorder wait time the THUN torque sensing bottom brackets are available again. Unfortunately the costs on these went up substantially on this order so all the pricing has increased somewhat, but combined with a CA3 this is still the least expensive package for accurately measuring your direct human power output. Not to mention having proportional pedal assistance and everything else.
Crown Motors on Simulator
In addition to the small geared Outrider motors, we also have the Crystalyte Crown TC-80 and TC-100 motors fully modeled and put on our simulator. There are only a handful of Crown motors left so if you've been eyeing one of these for a summer build it would be good to get onboard soon. Our next shipment won't be until late September
Read More

September 12, 2013| Posted in News| Justin Lemire-Elmore| 26
Thanks to all those who turned up and packed the Hub Community Bike Shop in Nanaimo for the intro workshop on ebike conversions. We were happy to see so many in the community keen about electric assist, and hopefully you learned a thing or two as well.
We also had a good time at the 2013 REV electric vehicle show, and want to thank VEVA for promoting this technology year after year and providing this platform. And it was nice to see the annual kWhr ebike ride and BBQ happen once again at Jericho beach. Some traditions are timeless.

Finally, Anne-Sophie successfully made it to Santiago, Chile, concluding her 4600 km solo unicycle ride up South America with only a few bumps and bruises. We've been happy to have her back and overseeing the active unicycle corner of our shop and many other behind the scenes operations.

Quadrature PAS Sensor for CA3, Installs on Left or Right Side.

Through a partnership with King Meter, we've produced a modified version of their Pedal Assist Sensor (PAS) device to better integrate with the V3 Cycle Analyst. This device now has TWO quadrature output signals just like the THUN sensor, rather than a single output that responds in one direction only. This enables you to choose between installing on the left or right of the bottom bracket, and then indicate the forwards direction with the CA.
The input voltage range was increased to work from 5 up to 12V, so that it can run from the same CA connector designed for 12V THUN torque sensing bottom brackets, or normal 5V PAS sensors. As well, it still uses the split ring magnet sensor which can install without removing your cranks, and the sensor pickup is on a pivot assembly so that you can position it near the magnets regardless of frame geometry. All told, this is universal and easy to install PAS system for conversion kits that we've always wanted.
Read More

We've managed a work-around strategy for dealing with controller mosfets and now have the 25A and 30A controllers in stock again, and the 20 and 40A coming shortly. All of our controllers now work both sensored and sensorless, and have a jumper cable to select between two levels of regen intensity depending on what you or your batteries want. Not only that, they will automatically map the hall sensors so that there is no need to mess around via trial and error to figure out the correct pinout with a given motor. The full details will soon be explained on the controller store page.

The Stokemonkey Classic is Available Again 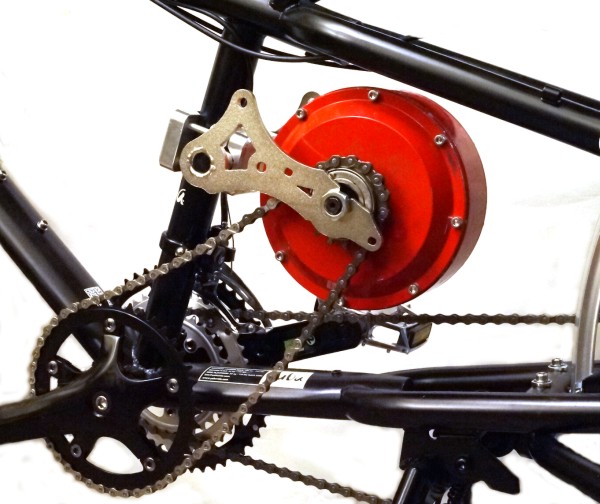 With all the hardware on hand, we're pleased to offer a re-release of the classic left-side-drive Stokemonkey system for cargo bikes. For all you Big Dummy, Xtracycle, Edgerunner, and Yuba riders who've been emailing for updates, well it has finally come. Full details are on the Stokemonkey Page.
The mounting hardware for the freewheeling right side drive Stokemonkey is still going through design refinements, and we don't expect this to be in production until December.
Read More 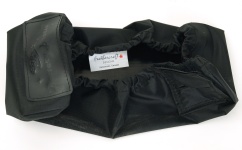 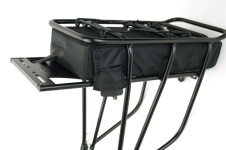 We believe that every piece of gear on an electric bicycle should handle the rain. In practice, that hasn't always been the case, and we've seen a few expensive eZee lithium batteries meet an early demise from water saturation corroding the BMS ciruit and leading to cell self-discharge. So it's been fun to partner with Feathercraft, a local collapsible kayak company that knows a think or two about waterproof fabric, to make a cover. The Battery Bootie has a velcro flap for key access, and can still allow the battery to slide on and off both the eZee rear racks and our CNC Twist Rail products.
Read More