Sometimes we do a lot of work on a project and totally forget to announce it anywhere. That happened a few months ago when we finished a large round of enhancements to the online CA Trip Analyzer software, courtesy of the hard work of our UBC co-op students Mila and Shivan. Then moved onto our next endeavors and forgot to make a peep.

The latest enhancements apply most specifically to the V3 Cycle Analyst devices, since the software now shows all the extended data such as human torque, motor temperature, pedal cadence etc. This extended data is shown on a second graph allowing you to customize not only which items to display, but also whether they scale on the left or right axis and how or if numeric stats on the right should be computed. 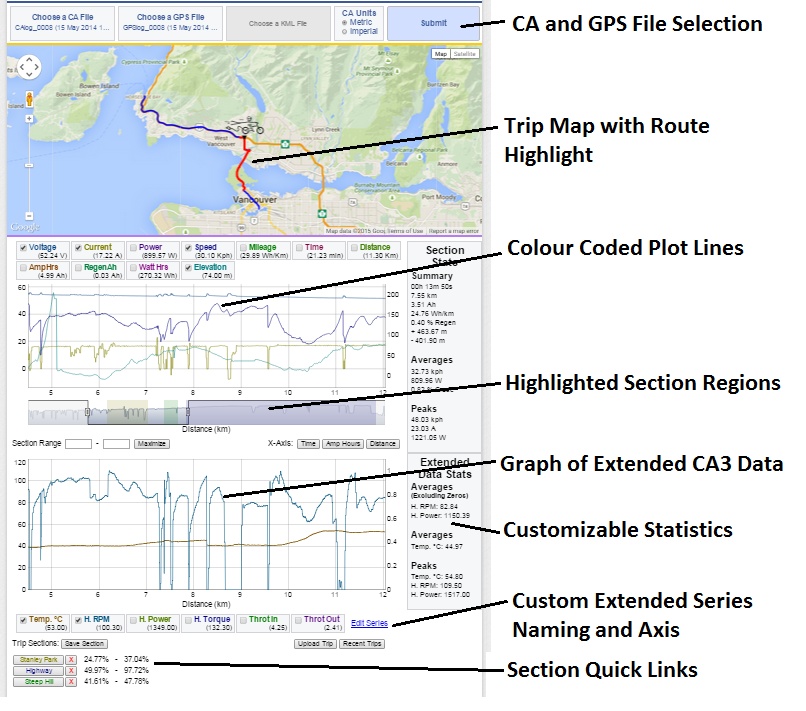 We've also made it so that named trip sections are highlighted in different colours and shown on the slider bar, allowing for easier visualization of the trip regions when communicating or sharing adventures. All of these capabilities are now summarized in the FAQ section. As always we appreciate feedback from people using these web tools. If you've got an interesting trip upload to share, please send the URL our way.

This February we quietly added a newsletter signup to our homepage for people wanting an active update on new stuff at Grin. Many hundreds have subscribed we're glad to have gotten the first newsletter out the door this weekend. It's a long one but worth a look, future updates are expected to be shorter and sent out every few couple months to keep you abreast of our undertakings:

If you're interested in having Grin updates sent to your inbox instead of sending your browser back to our website blog all the time then consider signing up. There is no need to have an account on our store site, simply enter your email address in the box to the right. However, if you do have an accont then you can easily enable newsletter subscription from inside your account settings too.

As part of our effort to be a tad more proactive in sharing the good word on our products, our resident dealer rep and sales guy Danial Sgzatti has produced an excellent little intro video on the Cycle Satiator charger. This short clip is meant to help highlight the Satiator benefits without having to read tons of text on our site, and we'd welcome you to have a look. 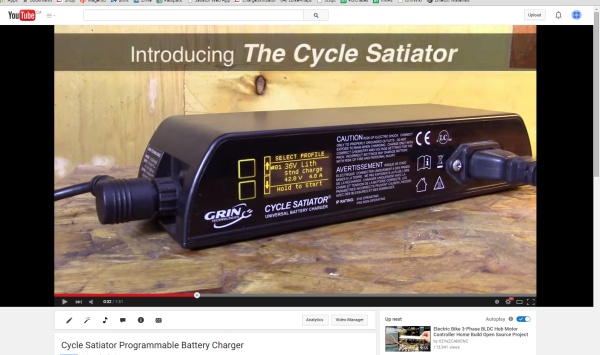 On the Subject of Cargo

Well, the informal Cargo Bike Championships were a real blast, with last minute entries bringing in a total to 37 participants. The event spirit wonderfully captured on video by Iaco Rocher here:

We wanted to publicly congratulate the two winners of prizes sponsored by Grin. Philip Marciniak got a V3 Cycle Analyst and LED light kit for the best custom built ebike for his scratch build longjohn style bike used for his appliance repair business.

And Fabrizio Cross got a $200 gift certificate for setting the electric speed record for the fastest lap on full scratch-built semi recumbent bike, with room for both children on the back. This is one of those builds that blurs the lines a bit between ebikes and higher powered 2-wheelers, but the wide scooter wheels and full suspension do wonders to smooth travel on the bumpy roads of his hometown on Hornby Island.

Also a shout out to Stuart and the Lecicle, who showed up with the best family bike designed by kids that we’ve ever seen! 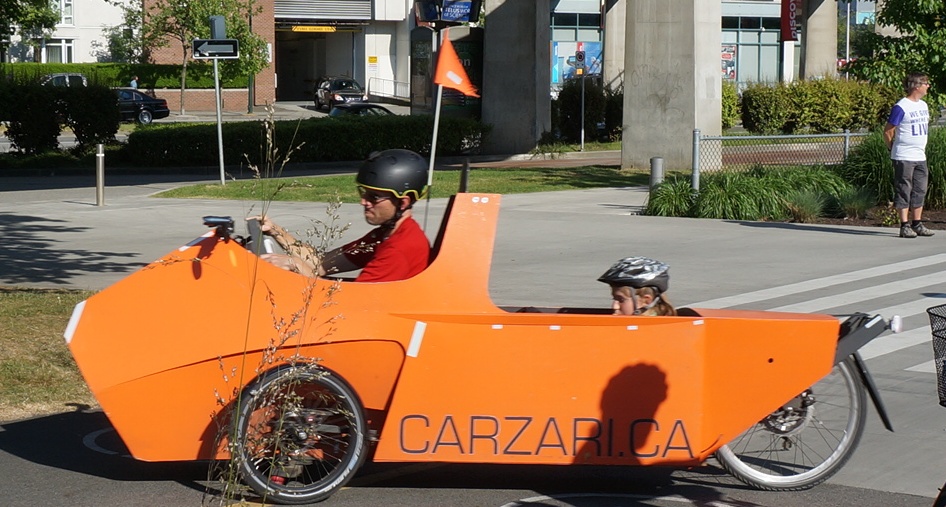 After a very successful pilot run, we’ve now done a full production and release of the Cycle Stoker kit for Yuba Mundo cargo bikes. Thanks to all those who’ve participated to resolve any kinks as we expanded this kit to the popular Yuba platform. We’ve updated the Cycle Stoker info page has recently to include a lot more details about this mid-drive option to answer questions for anyone else who is considering it

For those still awaiting a Cycle Stoker kit for Big Dummy cargo bikes, that will be next inline on this project.

Bike To Work, Bike for Errands, Bike to BBQ!

This has been an awesome time for alternative transportation in Vancouver. Not only did we learn that non-car trips (biking, walking, transit) outnumbered private vehicle trips for the first time ever; cycling use in the city jumped another 20% last year, the hopelessly archaic Business Improvement Association has finally acknowledged that bike lanes are good for business, and the weather and turn-out for Bike to Work Week has been amazing.  We’d love to know exactly how much of a role electric assist is playing in that, but it’s no doubt a very large factor for some.

Let’s not forget to celebrate all this at the wrap-up BBQ on Friday at Creekside Park besides Science World. The full details of the Cargo Bike Championship have been posted to the participants. It includes a race where you pick up more cargo on each lap and a host of prize categories, and should be good fun with nearly two dozen cargo bikes of all types in the mix.

For the categories of “Best Custom Built Cargo Bike”, and “Fastest Time with Electric Assist” we’ll be awarding winners with their choice of:

For all the other categories we’ll be giving away gourmet popsicles from our friend Johnny, who’s been making and selling unbelievably tasty cold treats from his mobile trike:
http://johnnys-pops.com/

Because of this event, we will be closing our shop early on Friday at 4pm so that all our staff can participate. To our local customers and friends, we hope to see you there too!

The classic V2 Cycle Analyst series hasn’t seen a firmware update in several years, and it’s time we fix that.  For anyone with a V2.3 Cycle Analyst, we’ve now got two more firmware options that you might like, both featuring the battery state-of-charge (SOC) icon previously only available with the V3 devices.

The first is a special Marine Firmware that we developed for a Dutch dealer. This trimmed down code is ideal for anyone using the V2 CA as a power monitoring device in applications where there is no need for speed and distance tracking, just watts, amp-hours, volts etc.  The Auxiliary Potentiometer Input has been re-purposed as a temperature input for thermal monitoring if desired too.

The second firmware update is a general purpose V2.4 release for vehicle usage. To a first order, this is very much like the V2.3 CA code with the addition of a battery icon, but there are many changes in the back-end and setup menus too which should be appreciated, including better rejection of spurious speed readings if the spoke magnet and pickup sensor become misaligned.

You can update any of the V2.3 Cycle Analyst devices (But not V2.25 and earlier) using the same software tool and programming cable as a V3 CA, as explained here. This update will reset your total life cycle statistics, so before reflashing be sure to write down your total Amp-hours, Distance, Battery Cycles, and other custom settings so that you can re-enter those values later.

So if you have an inkling to try out the latest, please load the code above and send us your feedback.

Get your Cargo Rolling - May 29th

There are few things we love more than riding around Vancouver hauling stuff on electric cargo bikes; turning heads and getting high fives and thumbs up while shuttling goods back to our shop at Grin. So we were smitten to see that Vancouver will be hosting it’s first every Cargo Bike Championship on May 29th, right at the end of Bike to Work Week, courtesy of Modacity and HUB. Read about it right here.

What’s a Cargo Bike Championship exactly? We don’t really know, but we figure it’s going to involve some kind of informal cargo hauling contest, some kind of vehicle rally, some kind of judging, and of course prizes! On that front we’re going to be sponsoring some very big awards, like Satiators and Lumenators and perhaps even a full conversion kit. We’ll update on the details as they materialize.

In the meantime though, if you ride a cargo bike of any kind here in Vancouver, whether for transporting kids or your full suite of work tools, then come help us to showcase this other side of utility cycling. Modacity is looking for participants to register their bikes by May 18th, so get your details in and lets make this a great little rally. It's timed to coincide with the wrap-up BBQ at creekside park from 4-7pm, where there will be tons of cyclists gathered and free foodstuff too.

Last year around this time we got our Torque Arms listed and stocked at Amazon for faster and cheaper shipping to US customers. Well we can now add to the mix the Grin Lumenators Lights, USB Power Adapter, and Cycle Satiator Charger too. So if you're after just one of these items and are in the United States, then you should find Amazon can deliver it to you quicker than we can here in Canada.

In our first community event of 2015, we’ll be participating in the BC Sustainable Energy Association’s (BCSEA) electric vehicle faire, taking place this Friday evening at Science World from 5:30-9:30pm.   This is being promoted as an opportunity to learn about EV’s, meet local EV businesses, and test ride any number of electric vehicles. Additional information is here:

So come on out, it’s not free but it should be worth it. We’ll be there to balance out the heavy presence of commercial electric cars with a full suite of electric cargo bikes, trikes, folders, and longboards, all available to test riding.

And if you do have a nice homemade electric bike or other PEV that you’d like to show off, it’s not too late to sign up as an exhibitor. Please either contact us or BCSEA directly to be a part. You can help bring awareness to the massive impact that ebikes can have as a viable transportation option.  After all, you don’t need 4 wheels, a roof, a trunk, and 2000lb of steel and batteries to get around town and have fun doing so. 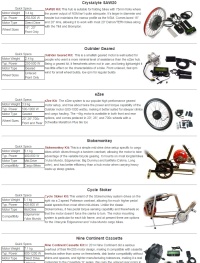 We’ve recently changed how ebike conversion kits are presented on our website in a way that hopefully makes it easier to find the best option for your bike. At the center of this is a new conversion kit summary page that highlights the key features of every Grin kit and the applications and bicycle types where they shine.

Our mission is always to create conversion kits that use universal standards and interchangeable components, and address interesting niche applications that aren’t well serviced by other “one size fits all” systems.

On the new kit front, you’ll now see two dedicated Brompton specific packages based around the Crystalyte NSM and SAW20 hub motors. We’ve customized the cable lengths and controller / Cycle Analyst mounting brackets to fit neatly on these unusual bike frames, had the motor axles machined with a 8mm axle flats and a 75mm length to be a drop in fit with the Brompton forks, and even made custom 8mm mini torque arms too. No fork spreading or dropout filing required, these kits are ready for primetime, and feature the same upgrade options of PAS and Torque sensing pedalec control as our other systems.

Have a look at the Brompton Kit info page where we’ve explained the options and compiled a detailed installation guide with plenty of photographs and pointers on how to put things together right. This is our first time preparing a kit install guide in many years, and we’d welcome any feedback as this will become a template for other conversion kit installation pages soon to come.